On the same wavelength with consumers

Active release of new products, according to consumer inquiries!

► Release of 6 types of mini- ricec cakes LiteBite for crunching was convenient and fun! 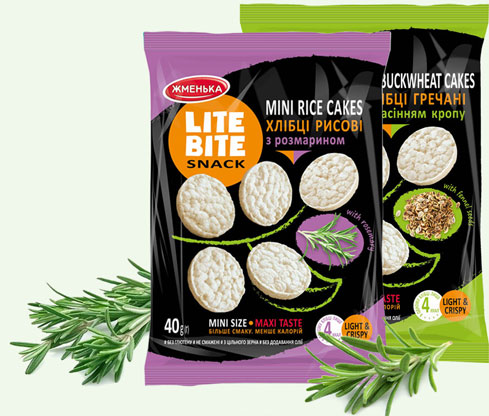 Save time and health!

A year of new achievements and conquest of new markets!

► The release of TastyMix in boil-in-bags has started – a delicious lunch with natural ingredients that can be cooked in just 20 minutes!

► A series of QuickLunch lunches has been released for a delicious and healthy lunch.

► The redesign of Zhmenka rice cakes packaging has been launched. 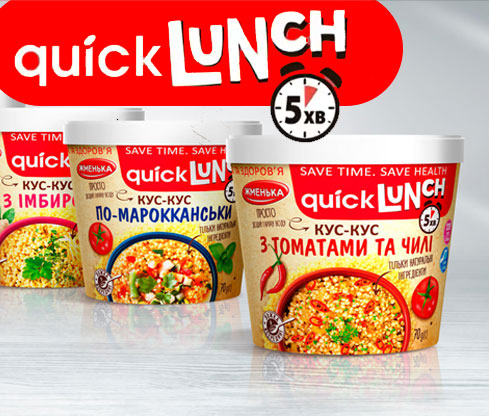 We are moving forward!

Save time and health with a production of TM Zhmenka!

► The range of rice cakes of TM “Zhmenka” has been expanded with a series of rice cakes with rye and cumin, as well as with Italian herbs.

► The release of the long-awaited novelty – delicate and healthy oatmeal in QuickEat cups from TM “Zhmenka” has started. 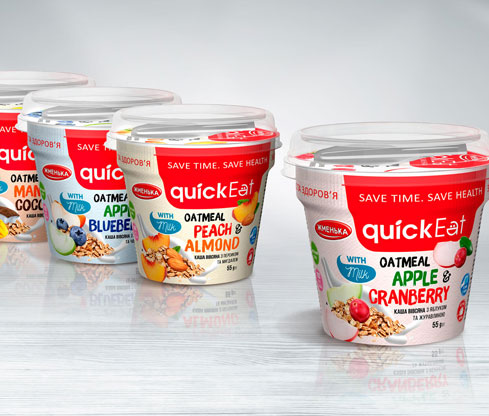 Active work in the market

Fruitful fulfillment of its mission and purpose

► A super crunchy novelty has been released in the range of Zhmenka TM products – 4 types of Super Granola for every taste.

► The company offered the market a ready-made solution for a quick and healthy breakfast, dinner or lunch, releasing 12 types of side dishes in combination with natural ingredients. 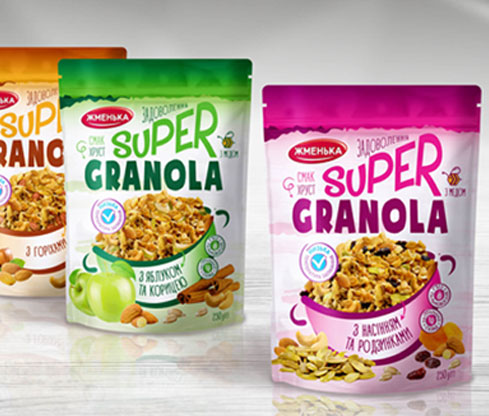 Only the best for consumers!

► The production of the desired superfoods in doy packs – white and red, black quinoa and its mixtures, as well as chia – has started.

► The rebranding of TM Zhmenka packaging has been launched in order to always meet consumer demands and time requirements in the future. 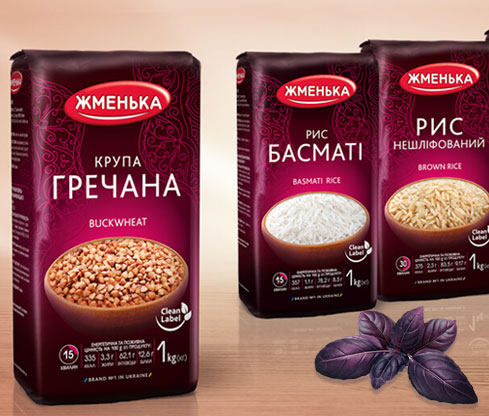 ► Further expansion of the range of rice cakes – the production of buckwheat cakes.

► For the first time, the Ukrainian market was able to enjoy a crunchy and sweet novelty – rice cakes in chocolate glaze. 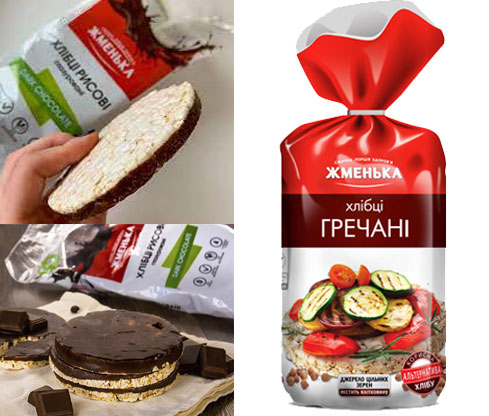 Keeping of consumer love for products 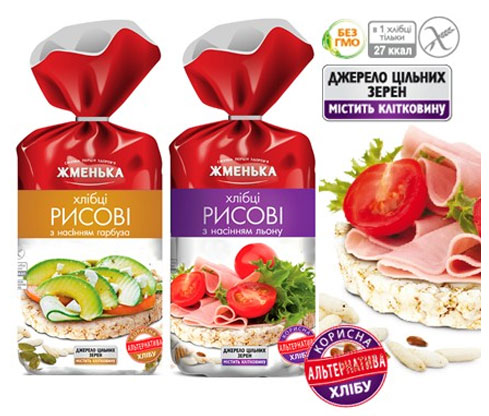 It is easy to satisfy all needs!

► A new series of useful porridges in bags for cooking has been released on the market – Children’s portion of TM “Zhmenka”.

► The range of rice cakes of TM “Zhmenka” has been replenished with a novelty – rice breads with natural sea salt.

► Production of organic oat, millet, buckwheat cakes and a mixture of three cereals has started.

► For the first time in Ukraine, organic types of rice are presented – Brown and Long-grained. 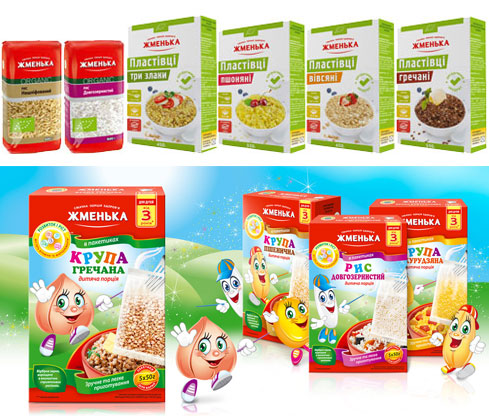 Maintaining the position of the leader and the subsequent release of new products!

► Redesigned the logo of TM “Sladov” and packaging for the entire range of pressed beet sugar.

► For the first time on the market of Ukraine a special variety of rice for cooking pilaf is presented – Rice Devzira under TM “Zhmenka”.

► Expansion of the assortment line of TM “Salute di Mare” with natural sea salt in mills. 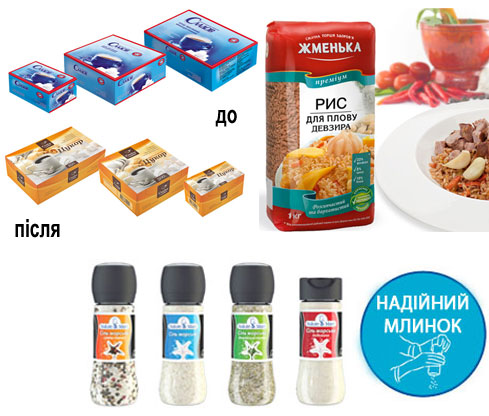 Release of new products and recognition as world champions!

► The basis of proper nutrition has been introduced to the Ukrainian market – whole-grain pasta under the Zhmenka brand: feathers, spirals and vermicelli recommended by Kateryna Serebryanska.

► For the first time in Ukraine, white lump cane sugar was presented under the Sladov brand.

► The range of TM “Zhmenka” has been replenished with useful rice breads based on brown rice. 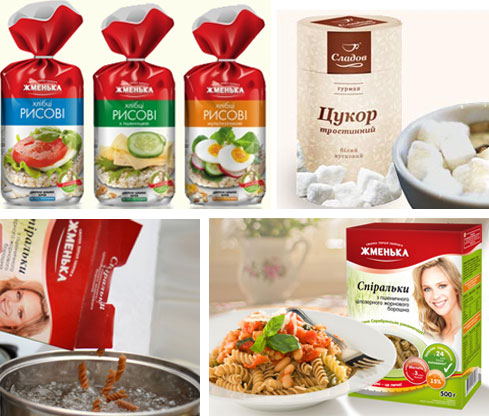 Release of products for everyone!

► Redesigned the logo of TM “Zhmenka” and all assortment items.

► Expanded range of wholemeal flour with new assortment items and organic products of this category.

► Introduction to the Ukrainian market under the Zhmenka brand of cereals of Arabic origin – Wheat KUS-KUS weighing 800 g and in convenient boil-in-bags.

► Organic cane sugar under the Sladov brand was presented on the Ukrainian market for the first time. 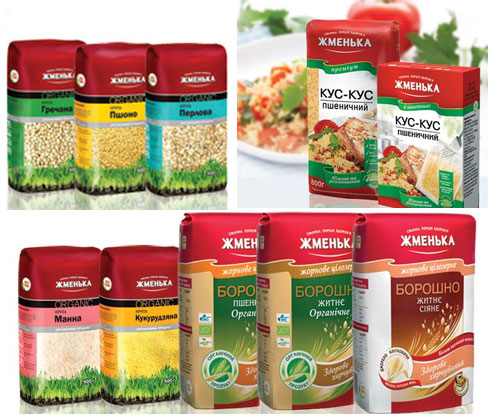 Meeting the needs for healthy food

Expanding the range of products for healthy eating

► Expansion of the line of organic cereals.

► Rice shells and spirals under the Zhmenka brand were released on the market.

► Introduction to the market of wholemeal flour under the Zhmenka brand.

► The range was replenished with brown sugar cubes of TM “Sladov”. 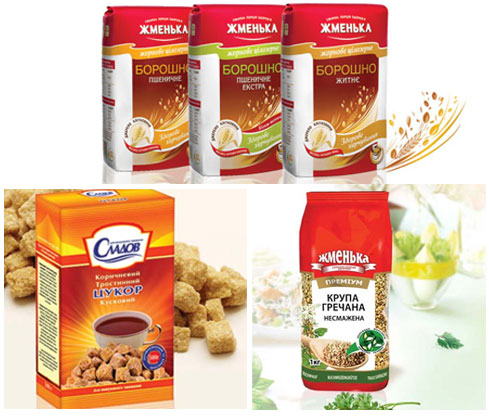 Only forward in all markets!

► Development of the private label direction: issue under ВТМ – FINE FOOD, Quiz № 1, Hit Product and for the network of CJSC “Fozzy” under TM “Povna Chasha”.

► Expanded range of “traditional” line of groats of TM “Zhmenka” barley, wheat, pearl barley, corn groats and split peas, as well as the release of these items in boil-in-bags.

► The range of rice products is supplemented by a novelty for the Ukrainian market – rice feathers.

► An exclusive sugar novelty has been released on the market – cane sugar Golden Granulated TM “Sladov”.

► Expansion of the range of salt – released small sea salt in a soft package of TM “Salute di Mare”. 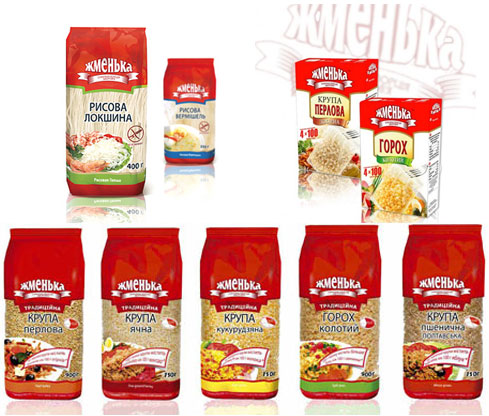 A powerful leap in the development of the entire grocery market

► For the first time in Ukraine the production of organic cereals of TM “Zhmenka” has started and certification in IMO (Institute for Marketecology) has been passed.

► Production of rice pasta has started: rice vermicelli and noodles.

► Production of goods under the project “Private Label” for the shopping center “Caravan” under the brand “Kupuyka”, for the network “Metro Cash & Carry Ukraine” under the private label “Horeca Selection” has been released.

► For the first time in Ukraine brown sugar Demerara TM “Sladov” is presented.

► For the first time in Ukraine, the only in Europe production of exclusive sea salt with kelp under the brand name “Salute di Mare” was launched. 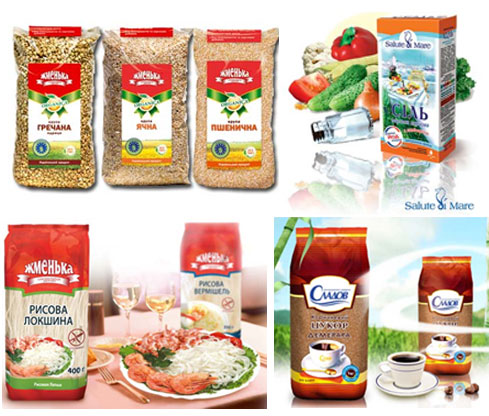 Production of exotic rice and development of sugar direction

► The record of Ukraine “Cooking, charity” and entered in the book of records of Ukraine – cooked the largest porridge in Ukraine.

► Production of pressed sugar under Sladov TM has started. Modern European equipment was purchased and put into operation especially for this purpose.

► A new line of exotic varieties of TM “Zhmenka” rice in a soft package of 500 g (wild rice, wild rice with parboiled, wild rice with brown rice) has been developed and launched. 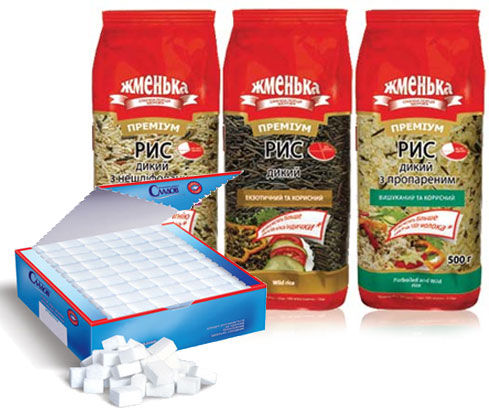 ► Expansion of the range of cereals in boil-in-bags for cooking: production of millet and wheat groats under the TM “Zhmenka”.

► A new line of business has been established – production of goods under own brands of national networks of Ukraine, for “Metro Cash & Carry” under TM “ARO”. 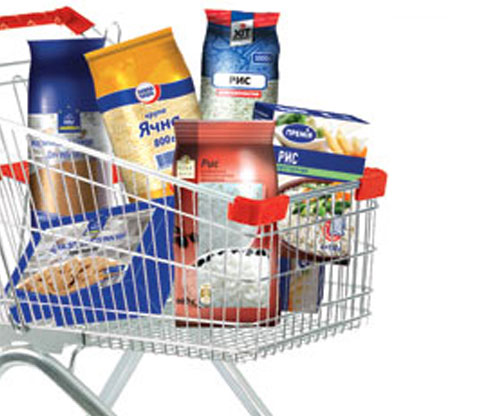 Production capacity is a factor of success in the market!

► The range of Zhmenka TM products is replenished with new items and product names.

► Modernization, updating of packing lines and installation of new modern equipment were carried out in order to improve the quality of produced cereals, rice and double the capacity for packing products. 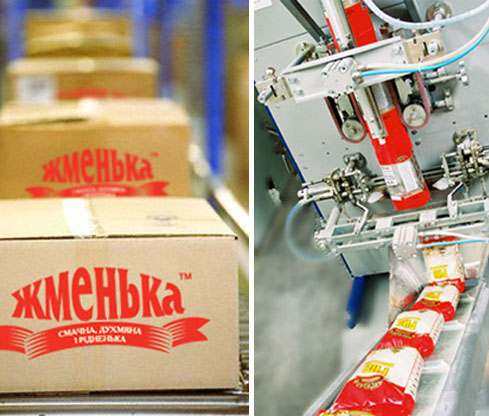 A handful conquers the HoReCa segment and small outlets!

► Production of rice in 5 kg packaging for the HoReCa segment has started.

► Distribution in the regions of Ukraine is actively developing, products under the Zhmenka brand have become available to residents of all parts of Ukraine. 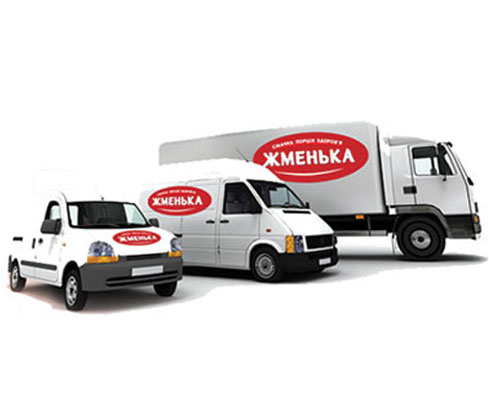 Packaged novelty for the market!

► Active development of the category of cereals in bags for cooking has begun on the Ukrainian market – with the production of packaged cereals under the Zhmenka brand. 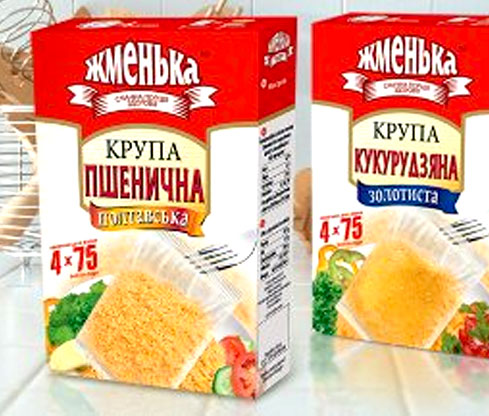 Formation of the brand “Zhmenka”

Products under the Zhmenka brand win the hearts of Ukrainians

► Thanks to the conclusion of contracts with all existing networks at that time, products under the Zhmenka brand firmly took a worthy place on the shelves of Ukrainian stores and won the love of consumers for their excellent quality and wide range.

► Expanded range of cereals and rice under the Zhmenka brand, premium rice varieties have been introduced to the Ukrainian market. 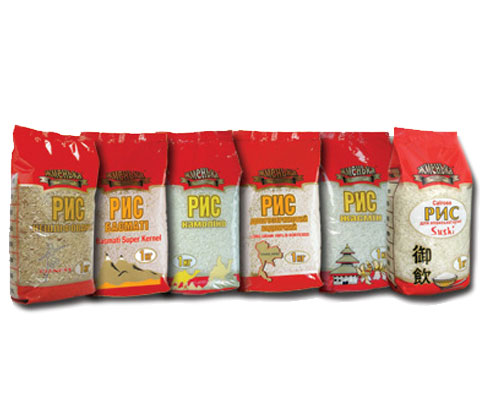